The number of job-seeking people in India has always been on a high. As per information available on the official website of the Centre for Monitoring Indian Economy (CMIE), there are currently nearly 31 million unemployed Indians looking for jobs. CMIE is a board that tracks business and economic data of the country.
It was noted that in the week ended on February 25, the unemployment rate increased to 6.1 per cent as compared to 5 per cent in January. This 6.1 per cent unemployment rate is noted to be the highest monthly rate in the past 15 months. 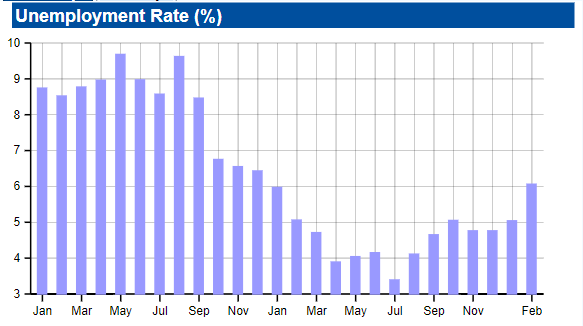 The numbers went as low as 3.4 per cent in July 2017, unemployment rates have been increasing gradually, the CMIE data further confirmed.
While the government claims that the unemployment rate in the country is falling, this data reveals an altogether different story.The table below shows the month-wise fluctuation rate in unemployment throughout India:

The table below shows fluctuation rate in unemployment throughout various states of India, as noted in February 2018:

Ironically, the unemployment rates was observed to have decreased after demonetisation in November 2016, as jobseekers focused on acquiring new skills instead of waiting for jobs in a hard-hitting economy.

During that period, the labour participation rate ranged between 46 and 48 per cent before demonetisation. By July 2017, it fell to below 43 per cent. Now the CMIE expects it to go past 44 per cent by the end of February 2018.

This brings us to the conclusion that as a new batch of students is set to graduate in May 2018, India will face a yet another jolt of unemployment. While there are about 31 million unemployed youth in India as of February, the number of job creation in 2018 is limited to an estimated 6,00,000.